Clownfish is a very common reef fish that live in warm waters like the Maldives. Divers and snorkelers see clownfish all the time. They are colorful, beautiful and thus highly admired. But Disney and Pixar’s 2003 film ‘Finding Nemo’ changed everything. It glorified clownfish and made a tiny, disable but very courageous clownfish called Nemo a worldwide star to the extent that every clownfish became a Nemo. Besides the humor and the beautiful messages, ‘Finding Nemo’ also changed our perspective of the ocean. It made us fall in love with underwater world.

So, here are some interesting facts about clownfish that ‘Finding Nemo’ didn’t tell us:

‘The flower of the sea’ they call home

Just like Nemo, don’t most of us find it hard to pronounce anemone? A sea anemone may look like a flower but it is actually a fish-eating marine animal. They spend most of their time attached to rocks waiting for fish to get close and ensnared in their venomous tentacles. Touching could give you a sting and leave the anemone bruised.

Check out the video

Over a thousand species of anemone live in the ocean but only 10 species coexist with different species of clownfish. The anemone provides clownfish with shelter and protection. In exchange the clownfish help the anemone by cleaning its tentacles of detritus and driving off intruders. In order for clownfish to live among anemone it has to protect itself first. While most fish try to eat the nutrient-rich tentacles, the possibility of being stung while eating stops clownfish from eating the tentacles of anemone.

And although the anemone has evolved to not strike the clownfish, in case it does, the clownfish protects itself by a thick layer of mucus three to four times thicker than other fish.

Clownfish perform an elaborate dance with an anemone before taking up residence, gently touching different parts of its body until acclimated to their host.

Surprisingly, all clownfish are born genderless. When they become mature enough they turn into a male. Usually the largest clownfish and the dominant is a female. When the female dies, the next largest fish in the group becomes a female. However, the switch is irreversible. 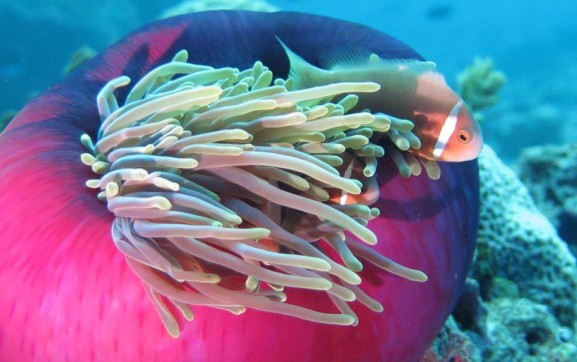 Some other general facts about clownfish: