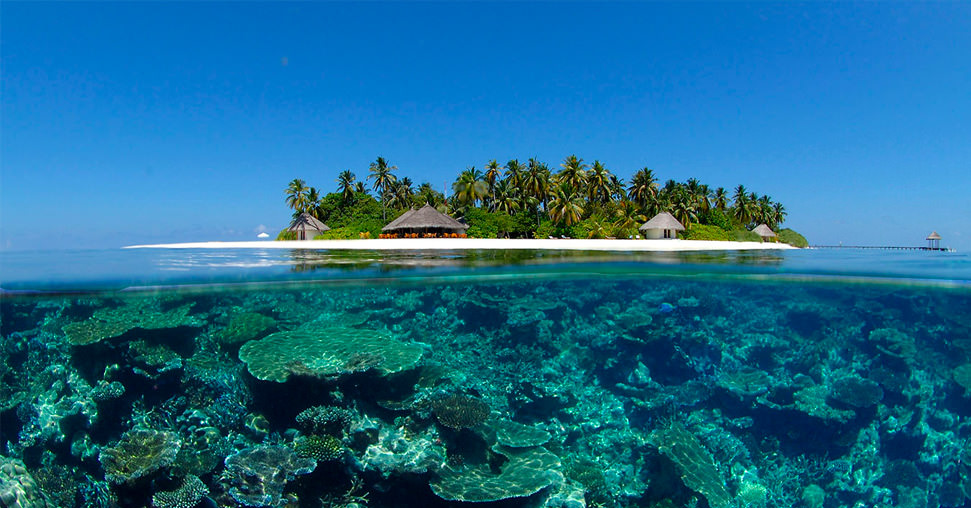 IntroductionHistoryIndustryClimateEconomy
Maldives or the Republic of Maldives is a tropical island nation in the heart of Indian Ocean, with more than 1,190 small, coral islands stretching over approximately 2000 kilometers. Maldives is the smallest country in South Asia and 10th smallest in the world. It also tops the list of lowest countries in the world with the average ground level of only 2.4 meters.

Maldives, though small in every way, is one of the most beautiful countries in the world with a rich heritage and a unique language. It is considered as a developing country, but is among counties with the highest literacy rate. About 300,000 people live in Maldives, of which, one third live in the capital city-Male’. Maldivians are simple, down-to-earth and hospitable.

For centuries fishing had been the main source of income until the tourism industry dominated it in the recent years. Despite the booming tourism industry, wide exposure to the outside world, lack of natural resources and foreign threats, the religious and national unity of Maldivians have remained firm.

It is difficult or impossible to state with certainty the exact origin of the earliest settlers in Maldives. However, studies indicate that the rich heritage of Maldives traces back to 300 BC. It is believed that the first settlers were most likely fishermen from the southwest coasts of, what is now the south of the Indian Subcontinent, and the western shores of Sri Lanka.

Historically, Maldives was an important island chain due to its location along the ancient marine trade routes. Traders from the Middle East, India, Sri Lanka and Africa visited Maldives. These visitors contributed greatly to the Maldivian culture and language. Legend has it that Maldives was converted from Buddhism to Islam in the year 1153 AD by a Muslim from North Africa, as a result of the Arab domination of trade in the Indian Ocean at that time.

After the 16th century European colonial powers such as the Portuguese, Dutch and the French meddled with local politics of Maldives. However these interferences ended when Maldives become a British Protectorate in 1887. The British pledged to protect Maldives from any foreign aggression while Maldives in turn agreed not to collaborate with any other foreign power without British consent. The British were also not to interfere with the internal affairs of the Maldives.

In 1953 the Maldives changed from a monarchy to a republic with Mohamed Amin Didi becoming the first President of Maldives. The first republic was a short-lived one. President Mohamed Amin Didi was overthrown and Maldives returned to being a monarchy and remained one until 1968 – about two years after gaining independence from the British. In 2015 Maldives marked its golden jubilee of independence.

Since gaining independence Maldives’ road to development took up pace, especially with the introduction of tourism in 1970s.

Tourism began in the Maldives due an Italian travel enthusiast named Giorgio Corbin who travelled to Maldives in October, 1971 after getting to know about the country from Mr. Kerafa Ahmed Naseem who was working at the Maldives High Commission in Colombo. He returned to Italy and published articles about the Maldives. As a result in February 1972 the first group of tourists arrived in the Maldives. Kurunba and Bandos, in Male’ Atoll, were the first resorts to be opened.

Maldives has come a long way since then-once an undiscovered tropical paradise is now one of the most popular tourist destinations in the world. At present there are over a hundred resorts in the Maldives. From high class luxury to simplicity and affordability, Maldives has it all. Almost all the resorts have a range of facilities and activities including water sports, diving, spa, restaurants serving a variety of cuisines, bar, gym, kids club, pool, tennis court, etc.

Over the years the industry has evolved immensely. Maldives was once considered as an expensive tourist destination. However, over past decade or so the image has shifted. Today tourists have a range of affordable accommodation options which include resorts, liveaboards, guest houses, hotels, etc.

Along with the fast-growing guest-house sector, liveaboard sector is also developing. Currently there are close to 90 liveaboards in the Maldives.

Maldives is located in the Indian Ocean, southwest of Sri Lanka and India. More than 99% of the country is covered by sea and the remaining small percentage makes up the land. The 1,190 or so islands are distributed over about 90,000 kilometers. Only 200 islands are inhabited while about 115 islands have been developed into resorts. There are 26 atolls in the Maldives and most of the resorts are located in Kaafu, Alif, Baa and Lyaviyani Atolls. The capital city of Male’ is one of smallest capital cities in the world and is located in the middle of the atoll chain. It is home to about one third of the Maldivian population.

How the island chain was formed is an ongoing debate. However, it is believed that Maldives is formed on the tip of a volcanic mountain range. Charles Darwin’s theory is that ring shaped atolls are coral reefs that grow around submerged volcanoes that rise from the sea. When the volcanoes subsided it left the reefs which were covered with sand and later colonized by plants and animals. Although vegetation in the islands is limited, it is supplemented by the riches of the sea; varieties of corals, abundant colorful fish and other organisms.

The climate of Maldives is warm all year round. However, because Maldives is on the equator, the monsoons are mild and not as defined as in neighboring counties. Of the two monsoons, the southwest monsoon from May to October brings some rain and wind. The northeast monsoon, from November to April, is the dry season with very little wind. The atmospheric temperature ranges from 32-26 degrees Celsius. The ocean temperature is very consistent at 28-29 degrees.

Like its unique geographical formation, the Maldives has a unique culture and language. Maldivian culture is derived from a number of sources, the most important of which are Sri Lanka and South India. The population is mainly Indo-Aryan from the anthropological point of view. The language is from Indo-Iranian Sanskrit origin, which points at a later influence from the North of the Subcontinent. The Dhivehi language is closely related to Sinhala. Although Dhivehi is spoken in all parts of Maldives, English is widely spoken.

Due to globalization and foreign influences Maldivians have evolved greatly. The young generation does not wear the traditional Maldivian attire, except on special occasions. Ancient customs are cherished but rarely practiced in the present day. However, religious customs such as Eid and circumcision of male children are still celebrated colorfully. Traditional music and dance, especially the Bodu Beru music and dance are still enjoyed by the Maldivian people.

Tourism, Maldives’ largest economic activity, accounts for 28% of GDP and more than 60% of foreign exchange receipts. Over 90% of government tax revenue comes from import duties and tourism-related taxes. Fishing is the second leading sector. Agriculture and manufacturing continue to play a lesser role in the economy, constrained by the limited availability of cultivable land and the shortage of domestic labor. Most staple foods must be imported. The Maldivian government implemented economic reforms, beginning in 1989 that initially lifted import quotas, opened some exports to the private sector, and liberalized regulations to allow more foreign investment.
￩ ￫ x
Top